All concerts are free and open to the public. 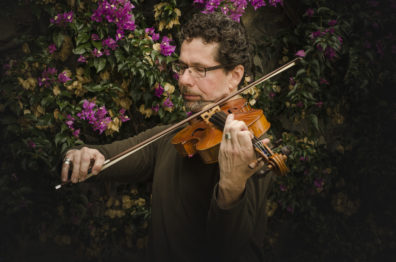 Musician Kurt Rohde plays viola and composes. He lives in San Francisco with his husband Tim and their dog Hendrix. In addition to enjoying double IPAs, endless off-beat films, and long distant running, he plays viola and is Artistic Advisor with the Left Coast Chamber Ensemble, is a curator at the Center for New Music, and teaches music composition at UC Davis. Beginning in the Fall 2019, he became the Artistic Director of the Composers Conference.

Since 2016, he has spearheaded two initiatives to help create opportunities for underrepresented composers. The Kurt Rohde Emerging Composers Fund is a commission project supporting composers at the early stage of their professional creative lives are afforded an opportunity to create a new ensemble work alongside the players in the Left Coast Chamber Ensemble through workshops, public rehearsals and and subsequent revisions, and numerous performances. The goal of this project is the facilitate an enduring relationship between the composer sand the performers that continues after the commission project is completed. Kurt Rohde’s Farewell Tour Project – PARTS 1, 2, 3, 4, 5, & 6 is another commission project that targets underappreciated creative voices in the new music community. By commissioning 5 to 6 composers for each “part” of the project to compose works for solo viola, viola and piano, or viola and electronics, Rohde seeks to expand the viola repertoire with new work from an extremely varied range of composers, while addressing (and perhaps redefining) the possibilities of what the viola is capable of in the 21st century.

As a creative artist, Kurt is fascinated with the codification of failure in current culture, and is trying to find ways to incorporate non-binary notions of failure and catastrophe into the way he makes his work. The result is a musical style that is unpredictable, but with the intention for creating a phenomenon that possesses disarming immediacy and intimacy.

Rohde’s newest works are for the Brooklyn Art Song Society, Lydian Quartet, Lyris Quartet, cellist Michelle Kesler, tenor Joe Dan Harper, cellist Rhonda Rider, and pianists Genevieve Lee and Jared Redmond. He has received the Rome Prize, Berlin Prize, fellowships from the Radcliffe-Harvard Institute for Advanced Study and Guggenheim Foundation, and awards from American Academy of Arts and Letters, Barlow, Fromm, Hanson, and Koussevitzky Foundations. A CD of his song cycles Three Scented Candles and It wasn’t a dream… and Treatises for an Unrecovered Past for string quartet will be released on Albany Records in the Winter 2020. For more information, please visit his website at www.kurtrohde.com.

The Festival of Contemporary Art Music celebrates the art music of our time, highlighting the work of WSU student and faculty composers along with special guest and visiting composers. The festival was founded in 1989 by Dr. Charles Argersinger and is currently under the direction of Dr. Scott Blasco.

The 2020 Festival of Contemporary Art Music is made possible through generous support from the College of Arts and Sciences and the School of Music.